Sebring, Florida Highlands Lakeside Theatre (HLT) will conduct open auditions for the time-honored musical Oliver!, written by Lionel Bart and directed by Mike McMillian, March 2, 3, and 5 at 6 pm and March 7 at 9 am in the Drs. Thakkar Pavilion. The musical is an adaptation of Charles Dickens’ classic tale of an orphan who runs away from the orphanage and hooks up with a group of boys trained to be pickpockets by an elderly mentor. The large cast includes children and adults. All roles are available.

British accents will be attempted. Age ranges are listed below as a guideline. For example, if you are 40 and the age range is listed as 45 and up,you may still audition. If, however you are 16 we would not audition you for that role. The song you will be asked to sing is at the end of each character description. Characters with no song listed do not sing. There are a few solo singer roles in the Adult Featured Ensemble.

Oliver Twist is a young, goodhearted, and kind, but often mistreated, orphan who was born and raised in a workhouse. His generosity of spirit is total, and even when faced with serious maltreatment, he never loses his sense of morality or kindness. Age range 9-13, smooth boyish soprano singer /actor. British (not cockney) accent, bright and innocent. This character is in approximately 80% of the scenes, parents should note he will be required at rehearsal more than any other person in the show. For auditions prepare to sing a portion of “Where is Love.” Also, look over “Who Will Buy.”

Fagin is the middle-aged leader of a children’s band of thieves, a conniving career criminal. He takes in homeless children and trains them to pickpockets for him. Large age range acceptable beginning around 45; singer/actor. Cockney accent. Described as devious, a user, sly fox, con man, very personable. For auditions prepare to sing a portion of “You’ve Got to Pick A Pocket” Also look over “Reviewing the Situation.”

Jack Dawkins, the Artful Dodger, is a street kid, age range 13-18, singer/actor. Cockney accent. Very energetic, highly personable, intelligent and savvy beyond his years, Fagin’s right hand “man”. Preferably this character will appear older and slightly larger than Oliver. For auditions prepare to sing a portion of “Consider Yourself.”

Nancy worked for Fagin when she was younger. She is now a “barmaid” at the Three Cripples Bar, age range 20-30s, singer/actress with a good belt and decent movement skills. Cockney accent. She lives with and loves Bill Sikes, and is pretty, intelligent, and longs for a better life. Nancy is murdered for attempting to protect Oliver. For auditions prepare to sing a portion of “As Long As He Needs Me.”

Bill Sikes also worked for Fagin as a youth and is now a brutal professional burglar. A feared master criminal, age range 20-40s baritone actor/singer. Cockney accent. Good looking in a rough sort of way, sociopath, a killer who only looks out for himself. One of the worst of the worst in musical theatre. For auditions prepare to sing a portion of “My Name.”

Mr. Bumble is the Master of the Workhouse, age range 35-60, high tenor singer/actor. Cockney accent. A large, pompous and corrupt bureaucrat who takes great joy in abusing those below him. Usually played by a larger (fluffy) man. For auditions prepare to sing a portion of “Boy For Sale.”

Mrs. Corney, or Widow Corney is the Mistress of the Workhouse who later becomes Mrs. Bumble, age range 30-60, soprano belt singer/ actress. Cockney accent. Sharp-tongued widow, also corrupt. She has been a widow for twenty-five years and ends up marrying, dominating and humiliating Mr. Bumble. For auditions prepare to sing a portion of “I Shall Scream.”

Bet is Nancy’s friend, may also have worked for Fagin, age range 15-25, singer/actress should move well. Cockney accent. She idolizes Nancy.Preferably Bet is younger than Nancy. For auditions prepare to sing a portion of “I’d Do Anything.”

Mr. Sowerberry, the undertaker, age range 30-60, baritone actor/singer. Cockney accent. Kind of creepy, buys Oliver from Bumble to work in the funeral home as a coffin follower, maybe an alcoholic. For auditions prepare to sing a portion of “That’s Your Funeral.”

Mrs. Bedwin is Mr. Brownlow’s housekeeper. She is a kind and motherly woman who takes care of Oliver in his illness, and never doubts his honesty even when he disappears with Mr. Brownlow’s books and money. Age range 35-55. British (not cockney) accent. Warm personality. For auditions prepare to sing a portion of “Where is Love.”

In addition to the above, Nancy, Fagin, Sikes and Dodger may be asked to sing a portion of “It’s A Fine Life Reprise” and perform a tense scene involving quite a bit of acting.

Mr. Grimwig is a doctor, age range 30-55, actor. British (not cockney) accent. Upper class, a friend of Mr. Brownlow. Talks something like a parrot and has a strong taste for contradiction and threatening to eat his own head.

Workhouse & Fagin Kids, age ranges 9-18, will cast boys AND girls, including Dodger’s friend Charley. Singers/actors. Let us know if you have any special skills such as acrobatics, tumbling, juggling, dance, etc. Some cockney accents will be taught. We are looking for boys and girls who are bright and personable. Boys and girls will be in one or more of the following: Workhouse (orphanage), Fagin’s gang, Townspeople (rich and poor), and street vendors (older kids).

Adult Featured Ensemble, age ranges 15 and up, singers of all voice types, characters with cockney and traditional British accents. Included in this are the featured soloists: The Rose Seller (mezzo), Strawberry Seller (soprano), Milk Maid (soprano), Knife Grinder (baritone) and Long Song Seller (Tenor); featured roles Old Sally and Old Lady (cockney accents), and the Chairman. Let us know if you have dance training or can do acrobatics, tumbling or juggling. Featured soloist auditions should prepare to sing a portion of “Who Will Buy.” The ensemble will be asked to sing a portion of “Consider Yourself and/or Who Will Buy.”

Wear comfortable clothes and closed-toed shoes. This show will take commitment. Come prepared to share your scheduling conflicts throughout the extensive rehearsal process. Reasonable accommodations will be made. Contact HLT if arrangements are needed for auditions.
The show runs June 6-21, 2020. Tickets are available now at http://www.HighlandsLakesideTheatre.org.

Highlands Lakeside Theatre is a not-for-profit arts organization producing live theatre with local volunteer talent both on stage and off. There are many programs at HLT to serve all ages and walks of life, from childhood to retirement and beyond. New volunteers are welcome at any time.Contact Vanessa Logsdon at HLTSebring@gmail.com for more information about joining. 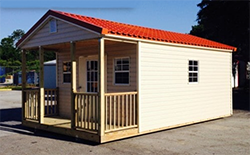 Designed for people who need a shed for storage, but want something with a little more style.